I was so impressed with this little beauty Sabina Brave included in her Always be yourself post over at Taste of life by Sabi: 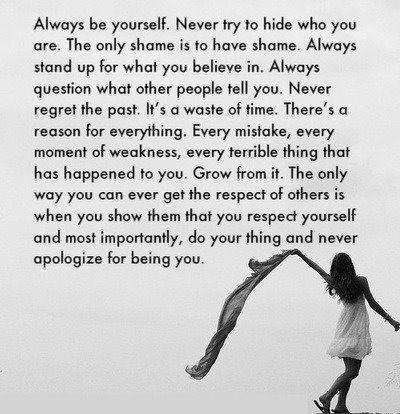 And I said as much in a comment there. But then I had to ask myself if there really was a place where someone like me could actually follow that advice? You see, I live in Ohio, a place so conservative that a psychiatrist once suggested that I consider accepting my mother’s invitation to live with her in Los Angeles. Obviously, she’s never been to LA. I have, and the two years I lived there were two of the very worst years of my life.

That’s when that damned song from the Internet Explorer TV commercial started looping around in my head:

So then I watched the most recent episode of Harry’s Law on my DVR. I don’t know if you’ve ever watched the show, but I like it because it takes place in Cincinnati, Ohio and depicts a conservative law firm taking on cases that any self-respecting Neo-Con (if such a thing actually exists) would run away from as fast as he could. Yeah, Harry Korn (Kathy Bates) is the kind of conservative I believed in back in the days of Ronald Reagan.

And “The Contest” episode was no exception, as they defended a 17 year old high school girl who, outraged by the Obama administration’s bowing to political expedience over solid scientific advise, was on trial for drug trafficking because she chose to buy and resell those “morning after” pills to other female students who were too young to buy them without parental consent. Amazingly enough, they won an acquittal for the girl – something that would never happen in the Ohio I live in, no matter how much I wanted it to!

So then I went back to my DVR to watch the “We Need The Eggs” episode of House M.D.:

Now is there anyone who actually believes that such a man could ever be respected by the “fellow humans” that actually populate this planet? I think not. Well House reflects the “inner me” better than any “real” person I’ve ever met – except for the whole him being brilliant thing and the fact that my cane spends a lot more time hanging in the closet – and that scares the crap out of me when it comes to actually saying what I really think to other people. So, despite the inclusion of great music like:

And an “in-cast” version (which was unavailable) of:

All I could hear in my mind was “And it feels like I am just too close to love you.” And let me tell you, it’s damned hard to drown out Cher singing with Beavis & Butt-Head!

In the end, I know that I’ve never met anyone that has agreed with the positions I’ve taken in my Tolerance… Not! and Major Rants posts, and they’ve gone damned near apoplectic when I talked about Ayn Rand the way I do in my In Her Own Words volume!

I ask you, is it any wonder why I live my life as an “Urban Hermit” today? Or why I fantasize about having my own “Button” like the one at the end of this video I offered as a comment on the great Would You Push the Button? post over at Motley News?:

More from the Major Rants volume

38 thoughts on “Can I REALLY Just Be Myself?”