Had to do a major cleaning inside my PC earlier today, after the noises my processor cooling fan was making became disturbing enough to force my hand. Mind you, this happened only days after my son’s much newer PC completely crapped out on him and, well, you know, my hunk-o-junk does have a history too…

Anyway, I felt so relieved at how quiet was was when I booted it up afterwards that I thought I’d post some of the many images I’d accumulated, but forgot to post, during my recent down time. Of course, before I could do that, my PC just had to freeze up for the first time in days, just to remind me not to get too happy! 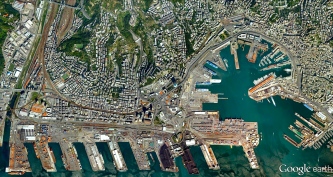 The Port of Genoa, Italy

The Memorial to the Murdered Jews of Europe in Berlin, Germany

The night sky over Horseshoe Bend, near Page Arizona

As you can see, I did get finally the images uploaded. But the freeze up did remind me of this Nouvelle Vague cover of Don’t You (Forget About Me) from Wednesday night’s episode of Stalker…

Which must have pissed my PC off I guess, because it froze up again before I could even save my draft!