If you are like the majority of the human population living in a first world country and watch Breaking Bad, then you may have seen work by the talented digital artist MRK. His video, The Flow made an appearance on the hit show. According to MRK’s description, “The Flow looks at the supervening layers of reality that we can observe, from quarks to nucleons to atoms and beyond. The deeper we go into the foundations of reality the more it loses its form, eventually becoming a pure mathematical conception. Layer upon layer the flow builds new codes that create new codes, each version computing a new, more complex state based on the previous one.” Read more about this project and its deeper meanings here.

Based in London, MRK creates incredible 3D generative visualizations of scientific theories. The diagrams shown here of organelles and cellular processes, as well as many other mind-blowing works, are available for purchase as prints here. I strongly suggest watching The Flow below as well as the video below it, which shows ten to the power of minus five as you travel through a capillary into a world of red and white blood cells, and into a lymphocyte to see its porous nucleus. See more brilliant work by MRK on his website. 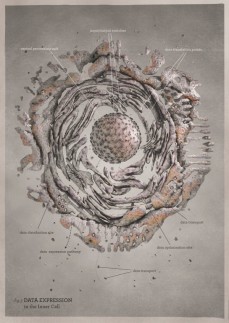 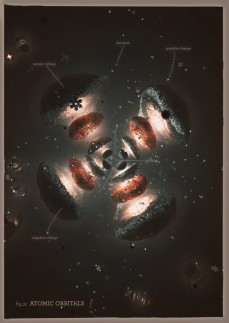 More from the Visual Treats volume